My first post on this blog was a schematic of a simple fuzz circuit I like to call the Gafiltefuzz due to it's filtery sound. Well, I tweaked it some and built it up earlier this week and it sounds great. There are some problems, which I will discuss in an upcoming video demo of it. In the meantime, here is the schematic for it so you can build it up yourself and maybe solve the problems with it: 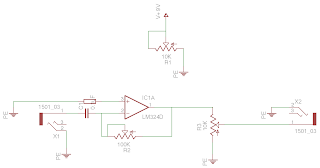 For the meantime, ignore the 9V's with the pot going to ground. This was going to be the dying battery simulator, but obviously that is the wrong way to do it. I don't know why it's drawn that way. . .I really don't.
Posted by Dylan Palme at 11:21 AM No comments: 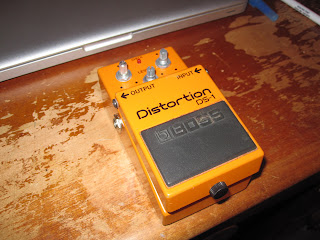 A week or so ago, I got a package in the mail, it was from my friend Al, from the band Cannibal Papaya. A couple months ago on facebook I asked if anyone had any guitar pedals they wanted to sell for cheap, and Al being the cool guy he is, sent me this Boss DS-1 for free.

When I got the pedal, the first thing I remembered was the gated feedback mod I saw on Casperelectronics' website, so I decided I'd install that.

This mod is extremely easy, and you only need three things: the DS-1, an SPST toggle switch, and a 2N3904 NPN transistor.

The point of this mod is to add some cool feedback to the distortion without having it squealing when you're not playing anything. 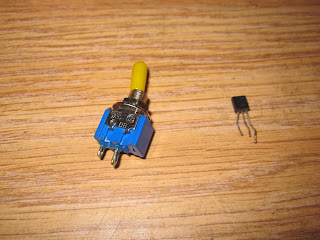 I had these laying around from a couple failed projects, that's why they're not in the prettiest of shape, but who cares? 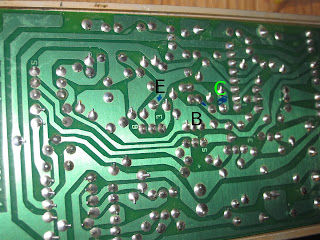 Here's how you should be hooking up your transistor, and remember to throw the switch on the collector.
And here's the whole thing soldered up: 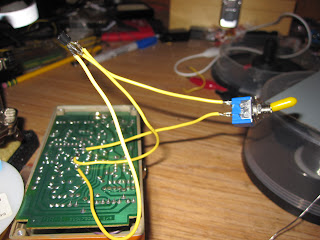 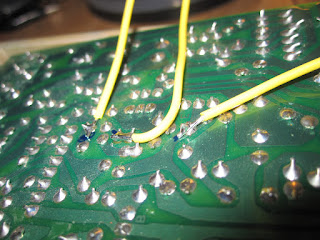 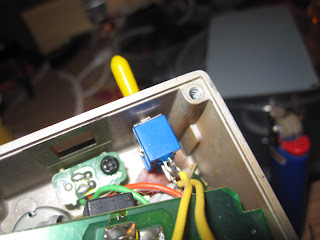 Thankfully there's plenty of space inside the DS-1 to mount the switch on the back side. 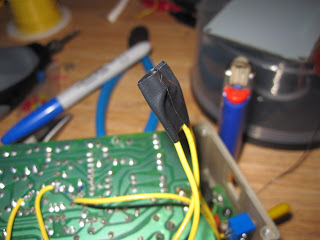 To make sure the transistor doesn't short anything out, wrap that S.O.B. in electrical tape or heat shrink tubing. Then you can feel safe cramming it all into the pedal.
And there you have it. A nicely modded DS-1. The end result is a nice bassey feedback effect. It's not something that I'll be using all the time, but for some weird experimentation, it'll work just fine. If I'm feeling more ambitious, I think I'll add a 1/4" jack instead of the toggle switch, so I can add an external foot switch to turn the effect on and off.

Now that I've added this neat effect, I think I better fix that dim dull LED Boss put in this thing. 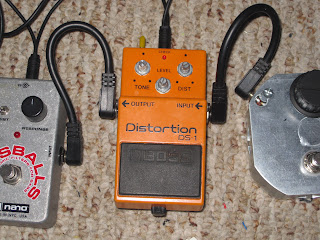 I needed a metal case to cut down on the hum, so I went to True Value and got a electrical device box for a couple bucks. 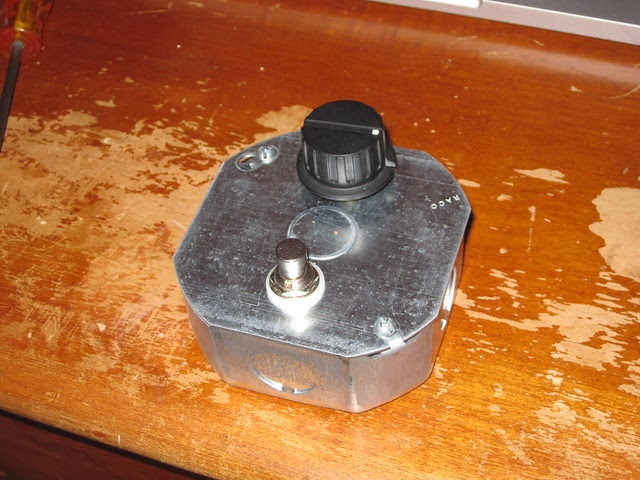 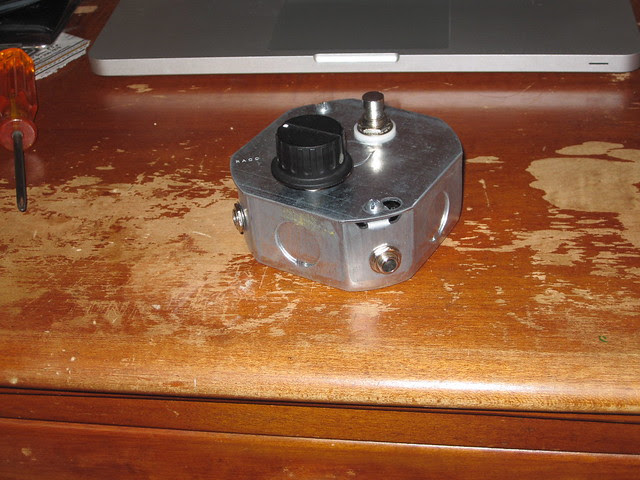 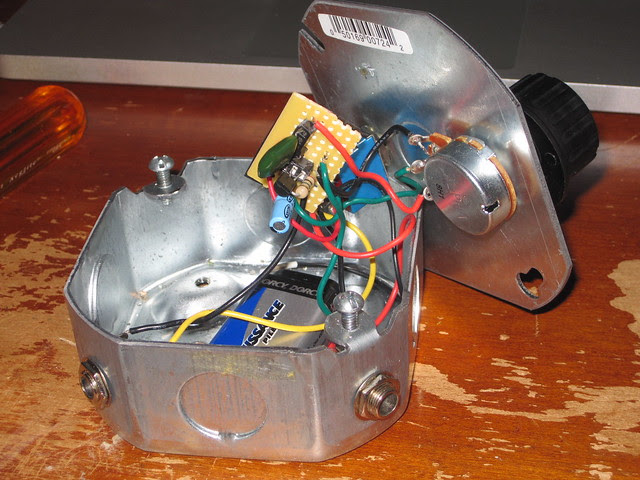 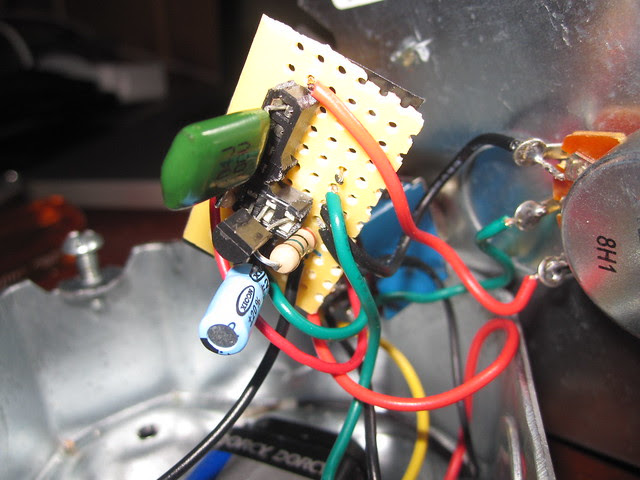 Posted by Dylan Palme at 1:01 PM No comments:

How To Set Up A 3PDT Footswitch For True Bypass

When I first started messing around with guitar pedals, I could never really figure out how to set up a 3PDT foot switch. I'd never used them, so it was kind of confusing, but when you just think about them as 3 separate SPDT switches it's very easy. I made this little diagram of how to hook it up: 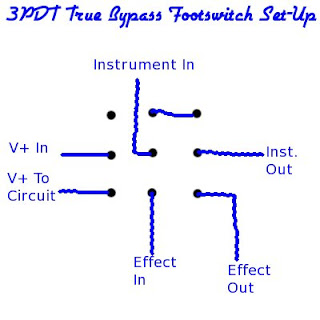 Posted by Dylan Palme at 8:11 AM No comments:

Every circuit bender/hacker out there knows the old bending probe of an alligator clip with a couple of jeweler's screwdrivers clipped on, but the resistance of that is incredibly low. The one I'm using here is 0.1Ω. 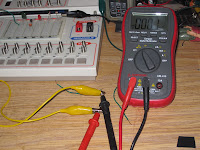 This low of a resistance can damage the circuit you're modding.

So how can we fix this?

Simple, all we have to do is add a resistor to the cable. Now we don't want a huge resistive load on the cable so I chose to use a 220Ω resistor. 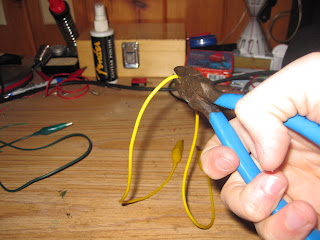 All you have to do is cut the alligator cable in half and solder in the resistor.


I soldered the resistor in so it doesn't make the cable that much larger. If you leave the resistor leads too long it won't be as flexible. 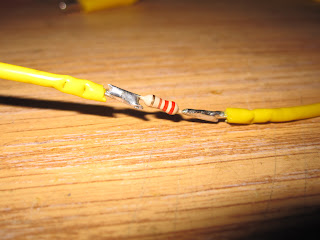 Now all you have to do is add some heat shrink tubing or electrical tape to protect your fancy shmancy new bending probe and you're done. Now you have a 220Ω bending probe that will help prevent any damage to your circuit. 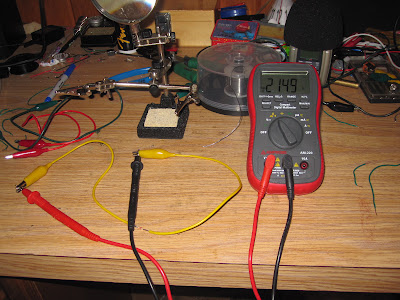 Email ThisBlogThis!Share to TwitterShare to FacebookShare to Pinterest
Labels: Tools

The Bazz Fuss is an incredibly simple fuzz effect for bass (though can be used with guitar as well). It only uses a handful of parts and you can put it together on your breadboard in about a minute. I would have done this as another "episode" of It Came From Radio Shack!!! but there are a couple more things you can't get there (metal case and 3PDT switch), the actual components though, you can find at Radio Shack. I got mine there for just less than $20. 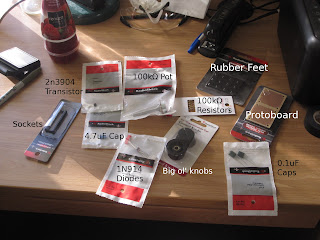 
All together, these things cost about $35.

I'm basing my build on this schematic from Home-Wrecker.com:

The circuit is insanely easy to build and can be thrown on a breadboard in less than a minute. Here's what mine looks like on the breadboard. 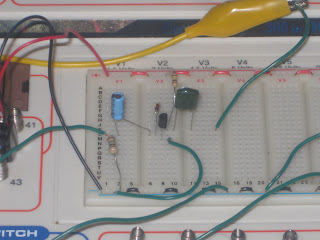 I also added a 1MΩ resistor for a little voltage divider to get it to work on mine. If you have a problem with your circuit working, just try adding that. 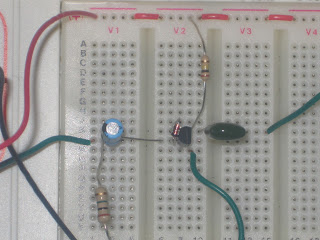 After testing it out on the breadboard for a bit, it was time to solder it up. I decided to use sockets for the caps and transistor, since there are many substitutions for these parts that add their own flair to the circuit. 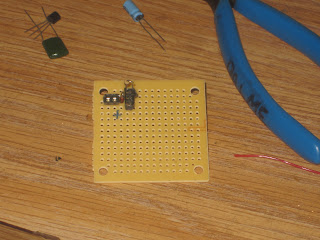 The original enclosure I was going to use was too small and I could not fit the battery in, so until I can get another one (I'll probably order it next week), I'm using a crappy little plastic box I grabbed at Radio Shack a little while back. Here's the final product all boxed up. 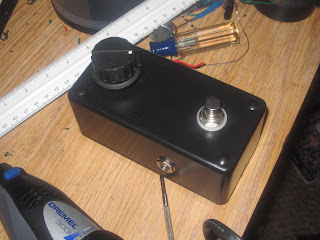 Welcome to my new portion of the blog, It Came From Radio Shack!!!. Being the paranoid type, I tend to not want to order parts online for my personal projects. So I occasionally (constantly actually) peruse the component bins at the Radio Shack in the mall. I've build many projects from the parts I get there, and I thought I'd share them with you.

As a circuit bender, I need a little mixer for recording and playing live, but I really don't need all the fancy shmancy functions of the one's I see online. So I found this schematic online and thought I'll modify it for the easily accessible parts I can find at Radio Shack. The modifications are replacing the TLO72 dual op-amp with a TLO82 dual op-amp (which are virtually the same IC), the 2.2uF cap at C7 is now a 10uF, and the 8.2kΩ resistor limiting the current to the LED is now a 220Ω. 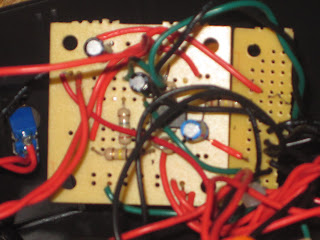 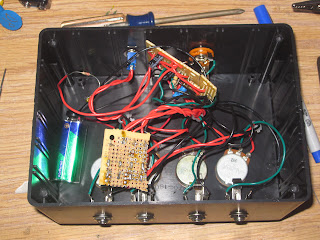 Sorry this doesn't have a real step by step process. I finished the project before I thought of this ongoing article. For my next project (still figuring that one out) I'll take pictures of the entire project, from breadboarding to laying out the enclosure.


DISCLAIMER:
This mixer is perfect for mixing different bent devices, but if your bent device has an extremely hot (loud) output, put a volume lowering resistor in line with the jack. If the output is too loud it will bypass the volume control in the mixer and be very very loud. I learned about this from plugging my speak and spell into it and having it be louder than toys that were cranked up all the way even when the S&S was turned all the way down (on all tracks). If you want to know how to adjust the volume of your bent toys, check out this article by Casperelectronics.


Next time on It Came From Radio Shack!!!: Resistor Box
Posted by Dylan Palme at 11:16 AM No comments: